Heroes B&B has created unique 5th Edition adventures from the world's oldest role-playing game. These adventures, per Wizards of the Coast rules, are available at no cost below. However be warned: If you look at them, you’ll certainly miss out on the surprises during your gaming experience with us!

​​In a world filled with raging seas, frigid storms and Loki’s influence dwells two Northland settlements. One of them swells with the riches of countless, successful raids; the other one stews on its perpetual bad luck and paltry earnings. The adventurer and their hardy band are part of this ill-regarded Northland tribe, the Ligr. But today, the plight of their tribe will change. For it is foretold! Today the Ligr’s shaman will call upon your small warband to ask one question: Will you take up arms against your powerful neighbor and forever banish your tribe’s ill-favored luck? 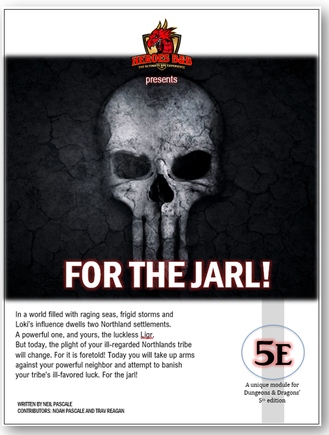 Heroes B&B 5e Adventure #2: King of the Deep (For the Jarl! sequel)

Through courage and discovery, you and your band of heroes have given a small Northlands tribe hope for a life that far exceeds its current, meager existence. But turning that hope into prosperity will require delving into a foreign place of unimaginable depths, where creatures and calamity await in equal measure. Will you take up the Northlands’ war cry once more in the name of your people?
** King of the Deep features unique underwater combat boons and special purchase options for players and their longship. 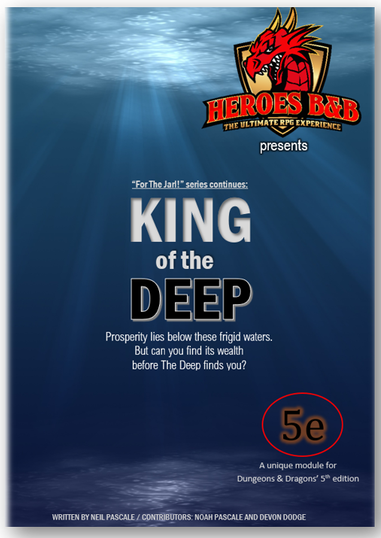 You’re a thug. Or a murderer. Or you stole some old lady’s last two copper coins. Regardless you’re in the slammer. And not just any slammer, but THE prison. The prison that has endured five centuries without one single escape. After all, the magical energy flowing around your cell isn’t just irremovable, it’s deadly to the touch. But it’s your lucky day. For an invisible presence has just provided you the means to escape this bleak place .... for a price. For this boon, you must escape the prison, and all its hazards, and then be transported to a ghost town of immense wealth and fame. There, you’re to steal a single, flawless gem. Oh, and about that gem: It’s rumored to be owned by an ancient black dragon nicknamed Beheader. Simple, right? So, criminal, the invisible presence prompts in a voice that sends chills rippling down your spine, when would you like to leave? 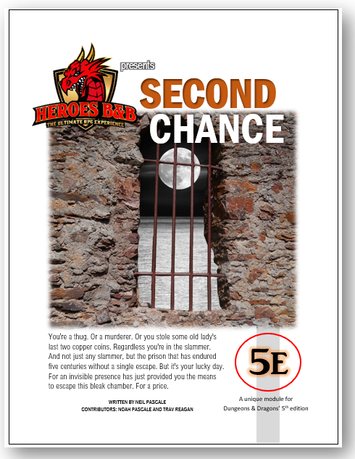 The Isle of the Tyrant Lizard King has been isolated from civilization for as long as can be remembered. But this land of dinosaurs, jungles and crushing humidity is far from forgotten. For this island has been a centuries-long battleground between a demon and a strange but successful pairing of fey and druids. Days ago, the ages-old confrontations renewed. And that’s particularly bad news for a motley group of adventurers who just showed up on the island.
**This sandbox adventure features special player item purchases from island merchants!
Module details:
TYPE – RP 50%; combat 50%
THEME – Dinosaurs and fey awesomeness
TERRAIN – Predominantly jungle
STYLE - Sandbox, with an overarching story 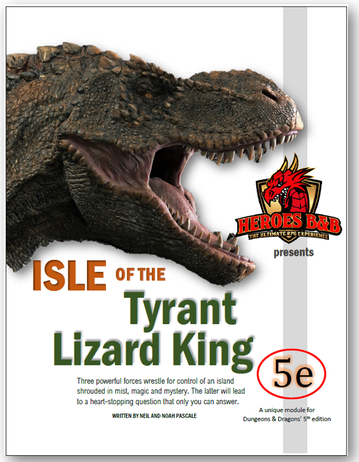 For generations a dire prophecy has concerned the courageous folk of Vesta, a mountainous land that acts as a sole and defiant guardian against an invading menace. The prophecy tells of the destruction of Vesta’s prominent land structure by a natural occurrence of behemoths. This dark prophecy, as newly arrived adventurers will quickly discover, will occur shortly, presenting a giant-sized question and a lethal conclusion for this group of adventurers.
Module details:
TYPE – RP 50%; combat 50%
THEME – A clash of cultures
TERRAIN – High-desert mountains and ancient woodlands
STYLE - One main storyline leading up to a single, knuckle-gripping question. 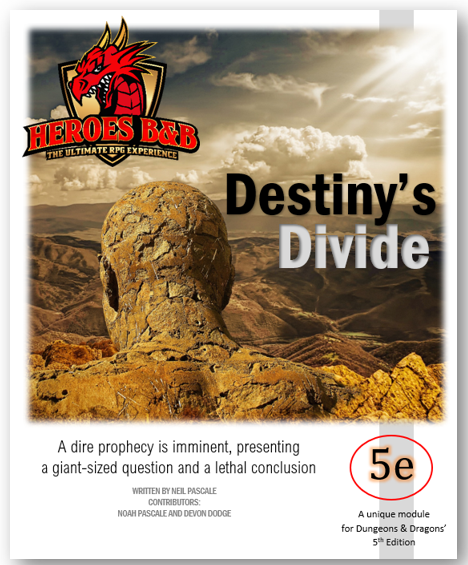 A revered, old Storm Giant with the gift of foresight provides the rarest of opportunities for a group of gladiators, but one fraught with uncertainty and danger. The gladiators’ mission: Assassinate a heavily guarded giant at his cloud castle by dispelling an enchanted – and hidden! – magic item.
** Sacred Storm includes unique gladiator traits and exotic weapon choices**
Module details:
TYPE – Combat 75%, RP 25%
THEME – Gladiators, giants and intrigue
TERRAIN – Arenas and a flying, cloud castle!
STYLE - One main story filled with challenging encounters 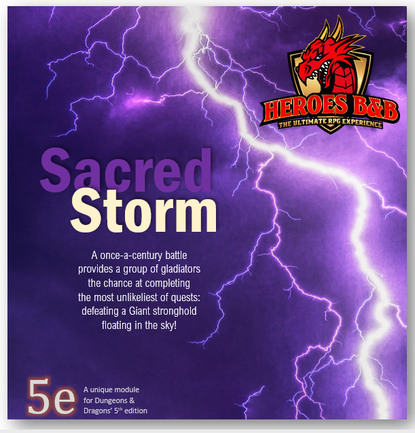 For hundreds of years, your friendly neighbors, the metallic dragons, have not raised their young. Their eggs, sadly, remain unhatched. End this mysterious situation and the reward will be every adventurer’s dream. This is a Heroes B&B adventure created for families and their young D&D enthusiasts.
Module details:
TYPE – RP 50%; combat 50%
THEME – Find a way to hatch and raise your very own dragon!
TERRAIN – Mountains and a massive volcano
STYLE - One main storyline designed for younger players ​ 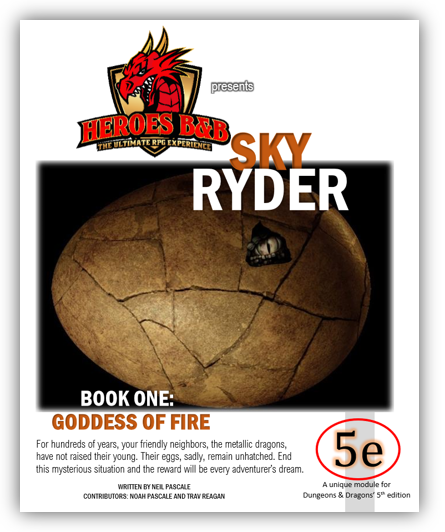 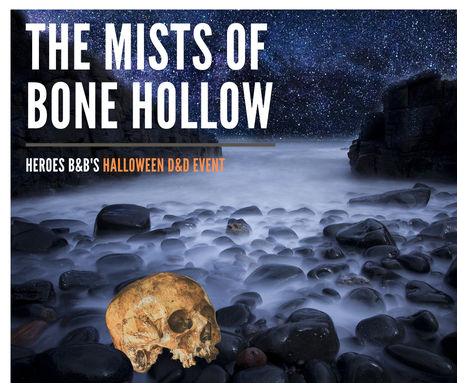 Dense fog, an absence of a breeze and a rank smell permeate the village of Bone Hollow. Here, tiny animal bones hang by the dozens like forgotten holiday decorations. These sights and scents greet a band of adventurers who are cast into this foreign atmosphere of angry ancestors, animated bones and baffling and confused children. The adventurers must discover what lies within the mists of Bone Hollow or vanish forever among its hanging, clacking bone clusters. This is a D&D 5th Edition module that debuted as a Halloween storyline and is built for a single-day game of 6 to 8 hours. It is suitable for young gamers and experienced adult players.
Module details:
TYPE – RP 50%; combat 50%
THEME – Spooky fun with a dash or two of mystery!
TERRAIN – Small village
STYLE - One main storyline designed for experience and/or younger players ​
5E Module coming soon!

The adventurers are members of a highly trained unit that specializes in the subduing of frontiers, untamed lands that someday will be farmlands and communities to their growing kingdom. An opportunity has arisen: A valuable area not far from a dwarven settlement – one rich in resources - has been discovered. If the adventurers can secure this distant location before a competing empire can, they’ll earn fame and fortune.
Securing it, however, will mean a foray into unknown and unclaimed territory, one with more than a few ancient secrets and civilizations.
**Untamed Lands features unique player benefits and traits tied to their specific role within their Frontier Division.
Module details:
TYPE – RP 40%; combat 60%
THEME – A wilderness filled with ancient powers and intrigue
TERRAIN – Forest, swamp, rivers, underground
STYLE - One main storyline but with a significant sandbox feature. Also designed for experienced players and higher level ​adventure!
SPECIAL - Player-characters' classes get additional sub-class traits, features and benefits as part of this module. 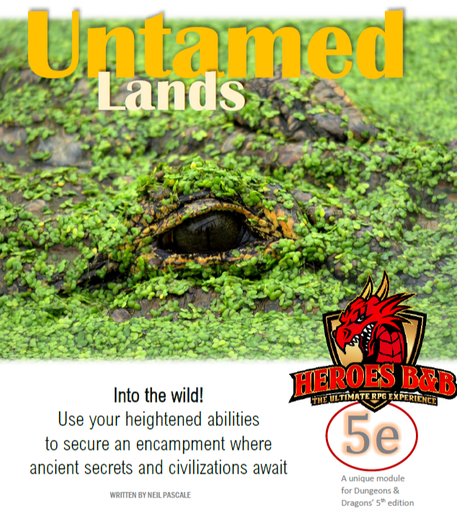 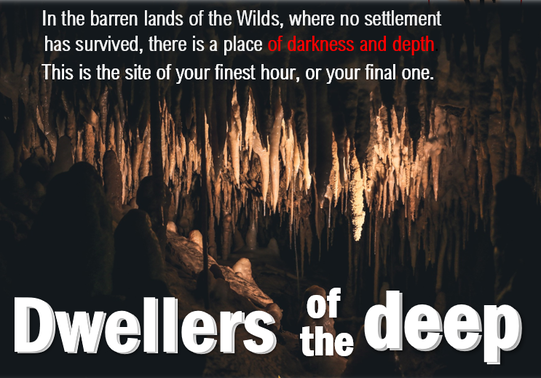 Adventure into the perilous lands of Vesta, highlighted in our "Destiny's Divide" adventure. This 5th Edition story acts as an introduction into "Destiny's Divide" and is built for a single-day game of 6 or 8 hours.
The story: A week before a popular tournament is held, the adventurers are convinced to cross into a highly dangerous land for a scouting and cartography mission. The mission quickly gets caught up in events that signal the imminent occurrence of a dire prophecy.

Module details:
TYPE – RP 40%; combat 60%
THEME – A wilderness filled with ancient powers and intrigue
TERRAIN – Mainly underground, some mountainous areas
STYLE - This is a series of memorable and nerve-wracking encounters and situations!
SPECIAL - Play this before our "Destiny's Divide" adventure and get special, magic items for the "Destiny's Divide" game. 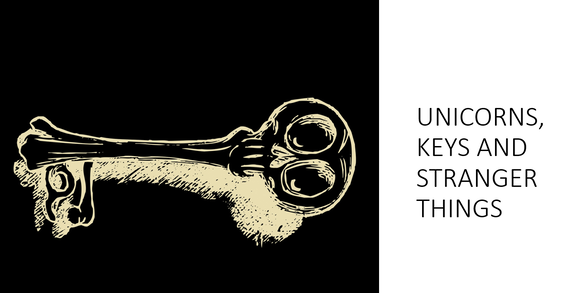 When asked, Heroes B&B came up with an adaptive version of 5th Edition Dungeons & Dragons that relies heavily on storytelling – a Heroes B&B staple –  and reduces the number of dice in the game. What our simplified D&D system doesn’t do is change the essence of the game, which is relying on the luck of a rolled dice to partially indicate the success a player has in overcoming the obstacles present in a fantasy setting. (See more on this simplified system in our blog section) In "Unicorns, Keys and Stranger Things," the adventurers are tasked by their king to find the rarest of fantasy creatures: the mythical unicorn.
Module details:
TYPE – RP 50%; combat 50%
THEME – Find a unicorn to give to the princess for her birthday
TERRAIN – Various
STYLE - One main storyline designed for young players or for an adaptive gameplay. ​ 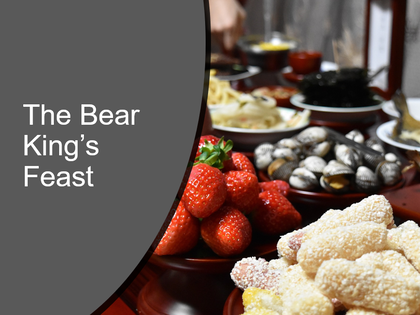